When we got in, we first went searching for some fish to eat but with no luck finding a fish to eat we started to get some Buff bream for bait,it didn’t take long to find some buffies, as they are quite plentiful around my home town of Kalbarri. Phet speared the first one which would have been about 2-3kg so me being competitive, I went and had a look for a bigger one than the one Phet got. About 30 seconds after Phet got his, I saw one about 4 kg lined it up and as I was about to spear it a bigger one about 7 kg swam past so I speared that one instead, it was a huge Buff bream.

So we both got out and put the fish up onto the rock and jumped back in for about 10mins when I turned around and Phet was yelling at me, “there’s a Bronze Whaler Shark get out of the water”, as we both got back onto the rock I asked him how big it was and he said it was about about 5-6 feet long which isn’t too big as far as Bronzies go, but it was the first shark Phet has seen whilst diving locally so it scared him a bit.

Always remember not to dive alone and to watch out for each others back. 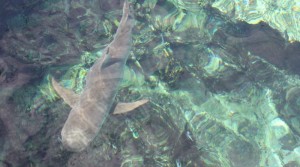 Hey guys part two of catch and cook part 2. I will be telling you how I caught and cooked my catch, and my preferred places to catch them. The fish that I use in this part of catch and cook is a small Baldchin grouper about 2kg, which I caught whilst fishing in a monthly comp with Laurie Malton from Murchison Boat Hire on board his 7.85meter aluminium walk-around. I caught this fish in about 30 meters of water, and the ground we were fishing was rocky broken bottom and had heaps of caves in the area which is the ideal habitat . I was using a 4/0 circle hook with a medium sized running bean sinker on 80lb mono leader and the bait I was using, squid and pilchards.

add fish to the pan and cook for 2-3 minutes, then add the prawns

serve on a bed of rice with greens on the side. 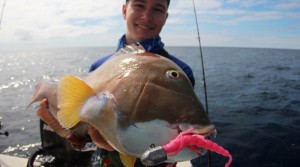 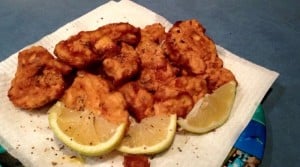 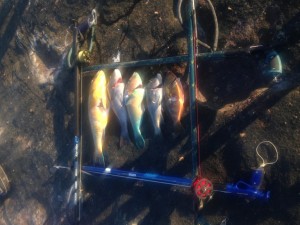